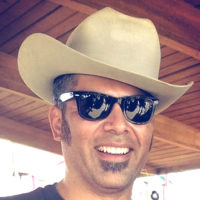 By now we've all heard about the "Six Degress of Kevin Bacon" game. Adam's story is not dissimilar in the music world. While by no means "famous", Adam has made quite the name for himself both with music lovers worldwide (touring and record sales), and with some of the greatest musicians in the history of American music.

It started in southern California where he was raised by a family who's patriarch was a transplant from San Antonio, Texas (Adam's grandfather and namesake) and who's matriarch (Grandma Lina) was an avid music lover and daughter of a professional musician of the 1940s and 50s.

Like many blue collar, hardworking families, music was an integral part of their American experience. Little did anyone know what amazing experiences and travels Adam would go on to experience because of the love for music they instilled in him.

Professionally, it started in his teens when he was given the honor of taking over for Jewel at her weekly gig in Pacific Beach, CA. Then it was performing with his own trio in front of thousands with Harold Mason on drums; former drummer for Stevie Wonder. From there it was studio sessions in Hollywood, working with a who's who in Tulsa, OK, building a career out of Austin, TX, studio session work in Nashville, TN and many more amazing adventures..

Since humble beginnings in southern California, Adam has gone on to work with an amazing (and diverse) cast of American roots music icons:

The "Six Degrees of Adam Lopez" is the most famous story you've never heard. Hear Adam tell his story through the music that shaped him and his career on a stage or street corner near you!

Sort by:
Loading... End of content No more pages to load
Playlists
Something went wrong, please try later
Save track to new playlist
Please enter a title to save playlist
Add track to existing playlist